We’re less than two days away from going into production. The plan is to shoot for 10 days over the course of two weeks. Which means the whole cast and crew will get at least a couple of days off each week.

It all starts bright and early (but not crazy early!) on Monday, August 18. It’s a nice indoor one –which is a great way to ease into the production madness.  Actors, Mandy and Jeff, will channel their ruthless, inner insurance agents as the characters Katherine and Dan. Elysia and David will strut their stuff as the close knit Maxine and Dad. 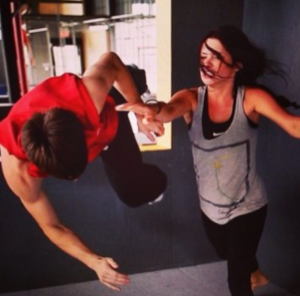 Elysia can teach Beyonce a thing or two about being fierce!

At Pervasive Insurance, logos watch you!

In addition to creating the wardrobe and planning the set deck, Art Director Marc Ngui, also been tweaking the Pervasive Insurance logo. Now with the addition of the camera, this whole logo is officially 42.5% creepier.

We’re super excited about our first day. Can’t wait to get rolling!